Weather forecasting in a heatwave

Weather forecasting in a heatwave

Weather guru, Chris Tibbs talks though some of the difficulties in accurate weather forecasting during the unusual event of a heatwave

Situated to the north-west of Europe, the UK is blessed with mild weather with few extreme weather events, and our temperature is moderated by the seawater around the shores.

Thanks to the Gulf Stream bringing a never-ending supply of warm water we have ice-free winters, while the sea also moderates the maximum temperatures during the summer. Compared to the extremes of temperature experienced by countries at the same latitude in the middle of continents we are fortunate indeed.

Even though the UK is relatively small, there are significant differences across it with the west being more of a maritime climate and the east continental. Earlier this summer we saw temperature records not just broken but smashed with UK temperatures going above 40°C for the first time in recorded history.

Increasing temperatures have been forecast by climate scientists. We know that although heat waves are rare, they will get more frequent, be hotter, and last for longer. So how will this affect our sailing? 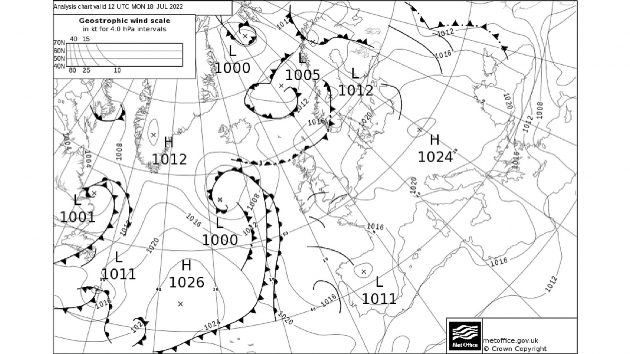 With increasing temperatures over the land, will this give good sailing sea breezes that drop away at night to leave anchorages calm and peaceful? Unfortunately, the development of sea breezes is a fairly complex process and the heating of the land to above that of the sea water temperature is just one component of the puzzle. As the land heats we need some moist convection to start the sea breeze process off. This is most clearly seen by the development of cumulus clouds over the land. The rising air and moisture generate the clouds and with their ascent, the surface pressure lowers. Air flows through the clouds and moves over the sea where it descends, slightly increasing the pressure over the sea. 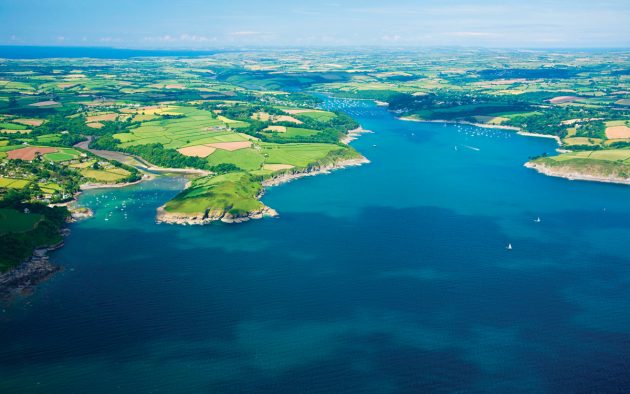 This year’s heat wave developed when we had high pressure over the UK and a supply of hot air being fed in from the continent. The lack of development of cumulus clouds was noticeable: high pressure means clear sunny days and high temperatures.

Theory tells us that with high pressure we have descending air – it’s a feature of all high-pressure systems and as the air, which is dry, descends and warms adiabatically it forms a lid preventing the development of clouds and the rising of air. This is a temperature inversion and prevents convection.

So while we had very hot temperatures over the land, the high pressure put a lid on any ascending air, preventing the development of cumulus clouds and therefore there was little or no sea breeze.

This ‘lid’ effect of descending air from the high pressure has been termed a heat dome as it effectively stops the heat escaping upwards while the land below gets warmer and warmer, a bit like a pressure cooker. The jet stream is far away and until it comes closer to the dome, a lid is kept on the heat and extreme temperatures occur.

Although we’ll still get gradient wind caused by the circulation around the periphery of the low, this will often be just a light breeze strengthening in places. It also tends to soften during the day as a sea breeze tries to develop, but fails.

When heat waves break it is often with thunderstorms and heavy showers. The inversion breaks as colder upper air moves in from the west and all the accumulated heat escapes upwards, generating large cumulonimbus clouds which in turn give thunderstorms.

The greater the temperature contrast between the land and upper air will determine the severity of the thunderstorm. At sea, apart from the relatively small risk of being struck by lightning, the main concern is the strong squalls that come with them. These are often of gale force ferocity with visibility reduced by the rain or hail.

There are also longer term concerns for sailors, as hotter weather will continue the rise in sea water temperatures which in turn warms the atmosphere. This is becoming more apparent as our night minimum temperatures are rising faster than the maximums. A warmer atmosphere holds more water so we can also get periods of heavy rain and unsettled weather.

The sea water temperature also has a direct effect on the position of the jet stream which delivers our weather and there is a direct correlation between the El Niño-La Niña events in the Pacific and the position of the jet stream and some effect on the weather in the Atlantic. It appears that the jet stream moves around to a greater extent than 50 years ago; this has led to less fixed weather patterns and more variable weather. The rising sea temperatures will inevitably lead to more extreme weather events, be they mid-summer storms and long periods of unsettled weather as depressions pass through, or extended heat waves.

There does not appear to be any good news from the extreme temperatures and the heat wave we have just experienced. A sobering thought is that according to figures from the UK Met Office, the top 10 warmest years for the UK since 1884 (the start of the series) have all occurred since 2002, while none of the 10 coldest years have occurred since 1963.

The post Weather forecasting in a heatwave appeared first on Yachting World.