Tapio Lehtinen’s Gaia 36 Asteria is the oldest yacht entered in the ‘retro’ solo Golden Globe Race, and has some unusual modifications for this unique event

Note: Since this piece was written Tapio Lehtinen had to be rescued in the Golden Globe Race after his beloved yacht, Asteria sank in a mere 5 minutes. It is unclear at this moment what the cause of this abrupt sinking was. As this article attests, Lehtinen was meticulous in his preparation for the event and was dismayed to lose his boat in such a fashion.

Sparkman and Stephens aficionado Tapio Lehtinen believes his Gaia 36 Asteria is the perfect vessel for the rigours of the Golden Globe Race, despite being the oldest yacht in the fleet having been built in 1965. Lehtinen completed the 2018 edition, the first ‘re-running’ of the famous solo non stop race, in 5th place in the same boat, after being hampered by ineffective antifouling that resulted in massive underwater growth.

However, a bigger refit than anticipated meant Lehtinen was not able to fully realise his vision for the boat last time. He bought her in 2017 in Italy, but it was only after sailing home to Finland that significant delamination was discovered in the deck. Eventually the entire deck and coachroof was sliced off and used as a male mould for its replacement.

At the same time, the hull was stripped right back to a shell, with all furniture and bulkheads removed. Even the gelcoat and top 1mm of the hull laminate was ground away and then relaminated with Kevlar to improve impact resistance against collision with floating objects.

“The boat is now how I would have liked it to be four years ago,” he told me in Les Sables d’Olonne the day before the start, “but then we just didn’t have the time to get to this standard.”

The Gaia design dates from 1961 and Asteria is the second boat of a total of 15 built. She has very similar lines to the Swan 36 which was first launched just two years later, although Asteria’s rudder is mounted on the trailing edge of the keel, rather than the Swan’s more modern fin and skeg profile. 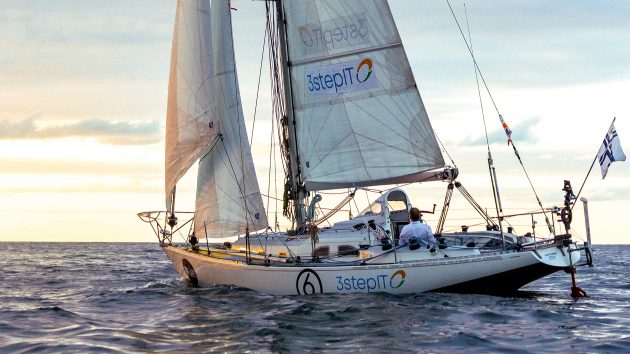 “It’s the only boat in the GGR that was originally designed for racing,” Lehtinen added, “and I wouldn’t want to race with a cruising boat.” Nevertheless Asteria is much modified compared to her original specification.

As well as three watertight compartments and foam buoyancy in the bow, there’s a pair of watertight bulkheads aft, which are not required for the race, but make sense for the rigours of the course. The first is just ahead of the rudder tube, while the second is a couple of feet further forward. All through-hull fittings are positioned between the two, virtually eliminating the chance of a failed skin fitting sinking the boat.

Conventional cockpit locker lids are notorious for letting in water during severe weather. Therefore flush-fitting Lewmar hatches were used instead when the new deck was fitted. The deck now also has a wider cockpit coaming to facilitate the fitting of large winches – there are three each side. At the same time the cockpit well is narrower than the original. It was specified to exactly fit the width of the liferaft, minimising the volume of water the cockpit will hold when pooped by a wave.

The very substantial aluminium tiller has an extension that in benign conditions enables Lehtinen to steer from the front of the cockpit, where there’s a clear view of the telltales. Noting that Jean Luc Van Den Heede, who won the first edition of the revived Golden Globe by a large margin, hand steered for a lot of the race, Asteria is also set up so that Lehtinen can steer from a position of comfort and safety in properly challenging conditions. 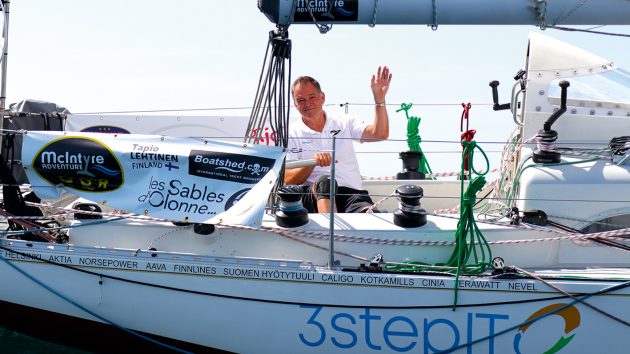 As we publish this, Lehtinen is in second in the 2022 Golden Globe Race. Photo: GGR/Etienne Messikommer

To do this he adapted an idea from Bernard Moitessier in the original 1968 Golden Globe. He can sit in the companionway, completely enclosed by the cuddy and washboards, steering with his feet in stirrups, from which lines are led back to the tiller.

The ultra-sleek cuddy is also a unique feature. Those of some Golden Globe boats look vulnerable in a knockdown, or add considerable windage aft, which may impair steering downwind in wild conditions when these boats lack the control of more modern designs with spade rudders. However, Asteria’s cuddy design was based on those used for racing powerboats and, despite being extremely lightweight, is rated to withstand capsizing at around 100 knots of boat speed! 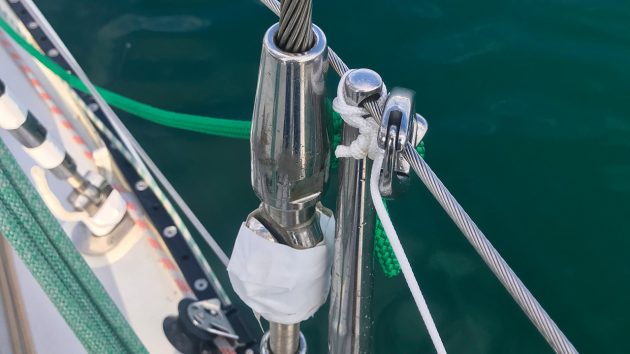 The 12mm standing rigging is massively oversized, while the mast, chainplates and surrounding structure are beefed up to match. Photo: Rupert Holmes

When the coachroof was rebuilt Lehtinen took the opportunity to reduce the width of the companionway. It now exactly suits his frame, so he doesn’t rattle around in the space in rough weather. There’s also extra strengthening at the companionway, with full height fore and aft bulkheads each side that are bonded into the hull structure.

Lehtinen says the importance of that is something he remembers from Miles and Beryl Smeeton’s experience on their 46ft ketch Tzu Hang, which lost the coachroof when pitchpoled on the approach to Cape Horn in the late 1950s. 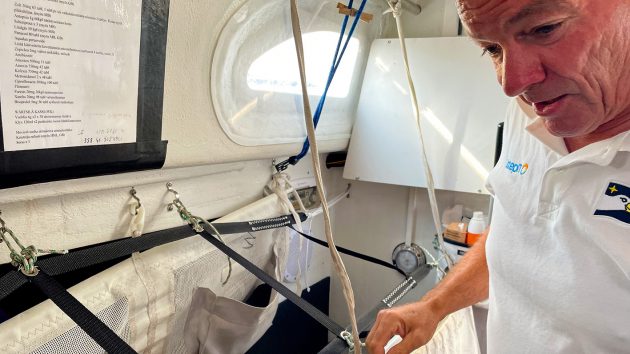 Lehtinen demonstrating the webbing ‘cage’ over his bunk to stop him being thrown out in the event of being rolled over or a severe knockdown. Photo: Helen Fretter

For this edition of the race he also changed from a WindPilot to a Hydrovane. This suits Asteria well as the chord length of her keel is unusually short, which means the rudder hung on its trailing edge is a long way forward and has limited effect. However, the Hydrovane’s auxiliary rudder, mounted on the back of the long, drawn out counter exerts lots of leverage. In many ways it therefore works more like the spade rudder of newer designs and allows Asteria’s main rudder to be locked off, acting like a trim tab. 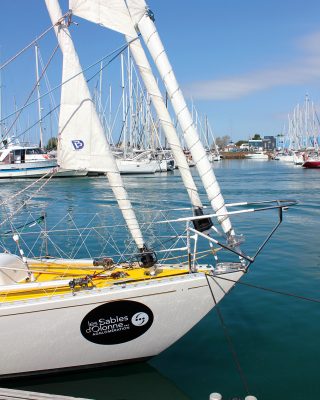 One of the changes Lehtinen has made since the 2018 race is to fit a continuous line furler to the forward forestay that enables hank-on sails to be furled. Towards the end of the race, when his big lightweight genoa was worn and weak, there was a risk of it being irreparably damaged in squalls as it was time consuming to douse. The reefing system means the sail can be wrapped away very quickly.

Downwind this stay can also be used for the hank-on storm jib. However, when sailing upwind the storm jib can be flown from the babystay in conjunction with a fourth mainsail reef (in lieu of a trysail) to give a more balanced sail plan. To give the mast appropriate support for this Asteria has a second pair of running backstays.

Standing rigging, normally 7mm or 8mm wire for a boat of this size, is upgraded to a massive 12mm, with Norseman-style terminals and both chainplates and the surrounding structure beefed up to match. The mast, new for the 2018 race, is of a heavier section than standard.

The Yankee on the main forestay and staysail are both roller furling sails and were used for the previous GGR. They’re made of very heavy Dacron, with substantial reinforcement, and have been fully serviced including re-stitching where it was found necessary.

Mainsail reefing is done entirely in the cockpit, using separate luff and leech pennants. The sail is set up with twin sheets, each with a purchase leading to opposite sides of the cockpit. It’s a simple arrangement that gives fine control over sail shape without the need for a traveller. The boat is set up with two poles for gybes, while the leeward foreguy can be led aft as a preventer. There’s also a jockey pole to keep the spinnaker pole off the guardrails.

It’s also noticeable that there are many substantial stainless steel handholds on deck and that jackstays are as close to the centreline as possible. Given Asteria’s narrow beam and fine ends Lehtinen uses a short tether to ensure he can never be washed over the guardwires.

His bunk is on the starboard side of the saloon, with a deep leeboard supplemented by webbing straps across the top, to ensure there’s no chance of being ejected and injured even if the boat is rolled through 360°. A steering compass and barograph at the foot of the bunk means Lehtinen can immediately check key data on waking up, including the rate of change of atmospheric pressure. 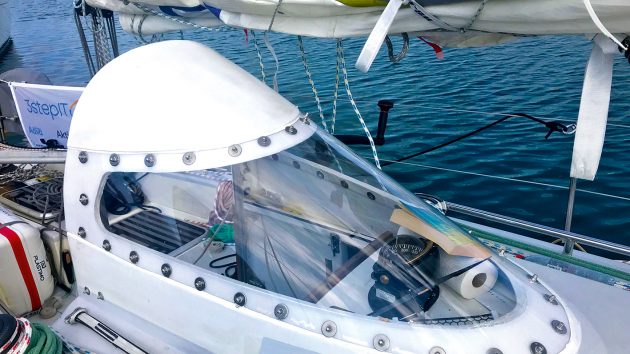 The sleek cuddy was originally designed for racing powerboats and can withstand a capsize at 100 knots. Photo: Rupert Holmes

The remainder of the interior is very functional, with a sail stowage area forward, a small navstation on the main bulkhead with the permitted electronics: VHF and SSB radios, plus an old school weather fax that allows synoptic charts and even satellite weather images to be downloaded via HF radio. These are all encased behind waterproof panels.